Another Win For Machne Menachem…Spritzer Loses Another Appeal

OPINION OF THE COURT

END_OF_DOCUMENT_TOKEN_TO_BE_REPLACED

Another Victory For Machne Menachem

The following was taken from whoisshmira.com

Yaakov Spritzer must return $1.3 million that he stole from  Machne Menachem.

The following issues have to be dealt with:

1. Yaakov Spritzer illegal activities throughout all these years.

2. Paying for all the damage he caused good families, by dragging them to Federal Court and bringing  a Blood Libel (RICO) against them.

Second loss for Yaakov the Ganev Spritzer:
IN THE UNITED STATES BANKRUPTCY COURT
FOR THE MIDDLE DISTRICT OF PENNSYLVANIA
Judge Thomas Final Ruling Against Spritzer – Finding of Facts (Click Here)

The Facts Of The Matter

Yaakov Spritzer: This case is not about a Camp (Coming Up… WIS will have a post dedicated in explaining what the case was really about…).

How Did Spritzer Get Hold Of The Camp Grounds?

Din Torah: Past, Present and Future. It’s been over three years since Yaakov Spritzer was called for a Din Torah and still has not shown any sign of cooperation. Din Torah Update.

The truth [as it was always] comes out. After many years of both sides representing their case in front of a judge, the court comes out with the second verdict against Yankle the Ganev Spritzer.

Read it once, read it twice, study it if you have too. You will discover where all the millions went.

Hint, not for the benefit of your children.

Nu, So How Did Spritzer Get Hold Of The Camp?

UPDATE 3/18/10: As expected; no surprise. In another effort to waste/kill time, Spritzer Appeals the bankruptcy decision above. I could go ahead and try to explain why I think, this appeal is a waist of time and useless, but whats the point, let’s first see if the appeal will be  granted.

It seems Spritzer expected the above verdict and decided to cause some more trouble for the rightful directors of Machne Menachem. Spritzer saw he was going to loss, so he went to Mr. Rubin, a lawyers he had not paid, while illegally operating Machne Menachem and advised him that now MM will have money and he should demand it from MM. Another long battle to deal with. This is far from over my friends.

UPDATE 3/18/10: Thank G-d I was wrong. The case has been Disposed (Click Here). Not knowing that the court had already disposed of this case on March 10, the directors responded with THIS, on the 15th. They were advised by the clerk that there is no need for a responds. I’m sharing this with you, to demonstrate the fraud that was about to take place.

Photos and Comments by Chaim Hershkop

“Did your father send you to take pictures of the empty buses?”

“My father didn’t send me, but you are correct in your assertion about the empty buses” (Chaim H.)

The truth be told, I did not expect this.  Baruch Hashem there are those that still take their Yiddishkeit/Jewishness/Religion/Shulchan Aruch/Torah serious.

I thought that all hope was lost, that people just don’t care anymore about whats right or wrong, left or right, and will just do what is good for them.

Seeing these photos and the photos on COL have strengthened my desire to push forward and continue spreading the truth with more vigor. I think it is safe to say that for the first time (when it come to this case of Machne Menachem), I was wrong. People do care!

For those that did go to this stolen property – regardless of all the facts relating to this case (knowing that this case is in middle of a Din Torah, knowing that there is a Ikkul from the Bais Din on Mr. Spritzer, knowing that your check  was and  will be used to do Mesira on other Jews. Click Here) – just to save a dollar.

There is a G-d in this world keeping a calculation, to him it makes no difference if you steal a blade of grass or a million dollars, you may have saves a few pesos now, but you will pay much much more later.

The pictures speak for themselves 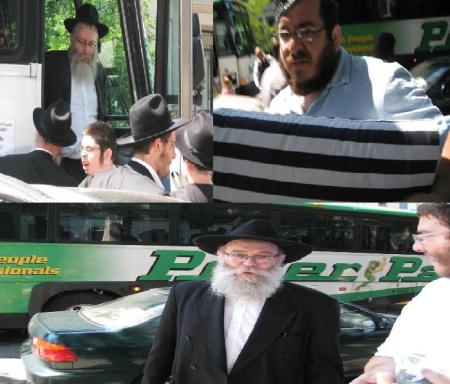