After Spritzer sends many letters to Bais Din in an attempt to avoid a Din Torah – as he has been doing for the last 10 years- the Bais Din sends him the following Letter, Dated 11 Shvat 5770 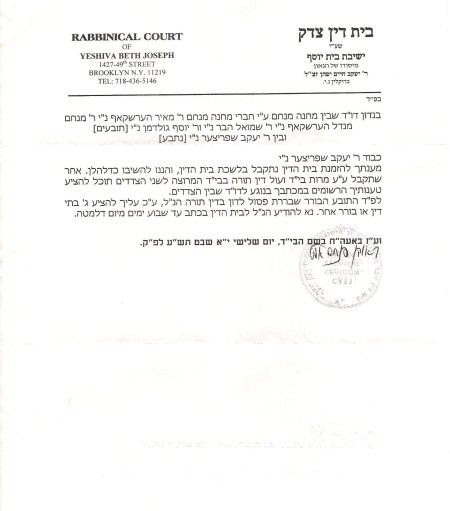 In has come to my attention and was no surprise to me, that Yankle Spritzer has been working very close with Paul Huebner (the Mosser who orchestrated the Shomrim Six Mesira). In the last motion that Huebner put in to court (re: the $144 million lawsuit), he tried to use, as Spritzer wrongfully and illegally did himself in the past,the restraning order that Judge Glasser put on the rightful directors of Machne Menachem  by 1997. Amongst the documents that Huebner is so foolishly trying to use are also transcript pages which he could have only gotten from Spritzer.

As already reported here, Spritzer was tried to use the Shomrim Six case to avoid a Din Torah.

The Mossrim Then And Now

This entry was posted on Thursday, February 4th, 2010 at 1:13 pm and is filed under Din Torah. You can follow any responses to this entry through the RSS 2.0 feed. You can leave a response, or trackback from your own site.