Din Torah: Past, Present and Future

Why has there not been a [proper] Din Torah until this day and why I think there will [probably] never will be.

PAST:
This case was in middle of a Din Torah, Spritzer took it to court.
In court the original directors (Hershkops, Goldman and Heber), agreed to return this case to Bais Din, but Spritzer
repeatedly refused. All this has already been documented and discussed in Parshas Machne Menachem, (under: Who Is Making A Chillul Hashem?). Even back then, the original Directors agreed to go to a Zabla, but again Spritzer refused (Read Rabbi Hebers Letter to the judge and Spritzers Lawyer).

CURRENT:
TRYING TO HAVE THE LONG AWAITED DIN TORAH.

On the suggestion of the Crown Heights Bais Din, the original directors seek to have a Din Torah out of Crown Heights.
It was decided to go to the Bais Din Machon Lehoraya Monsey.

Update: Spritzer played the Monsey Bais Din for over a year. After a year of back and forth Spritzer makes a request for a Zabla. The Bais Din of Monsey does not deal with Zabla, so they suggest that the Din Torah take place with the Bais Yosef Bais Din (located in Boro-Park) who deal with Zabla. The Monsey Bais Din informed the MM directors that they will monitor the situation, if Spritzer plays his usual games, then they will come out with a Siruf against Spritzer. This all happened Tammuz time (5769). Since that time the Bais Din Bais Yosef has been avoiding the Din Torah. It has recently come to our attention from information coming out of the Bais Din itself, that its not for no reason the Din Torah has been delayed.

The reason they gave was that they had received information from “various parties” that the Hershkop family where involved in a criminal preceding were it would be proved that they are a violent gang and therefore the camp in any case can not go to them, making the argument that there is no need for a Din Torah. The case they were informed about was the now famous Shomrim Six case. What has been known to myself all along and now becoming more apparent is that many people (including Spritzer) were banking on the g-d forbid prosecution and conviction of 6 innocent Jews just to satisfy their own agendas. It’s also becoming very obvious (I personally didn’t need this prove to teach me this fact for as I stated, this is something I could have told you mouth ago), that this whole case from it’s conception had nothing to do with what happened (or did not happen) in 749 on the night of December 29,2007.  סוף מעשה במחשבה תחילה

Three  Hazmonoz were sent to Spritzer… 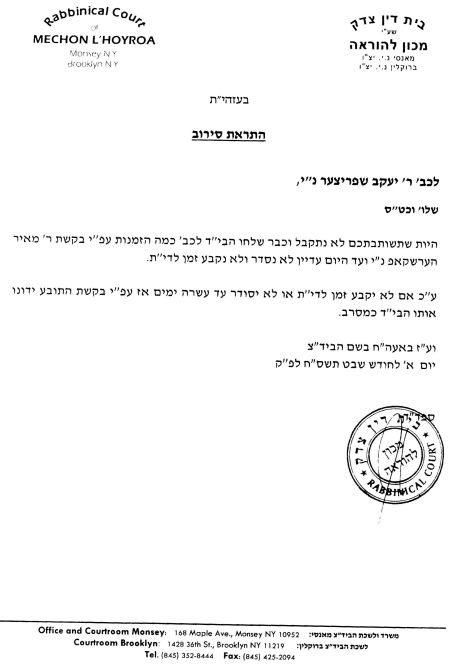 Spritzer (as usual) start his process of mocking the Bais Din 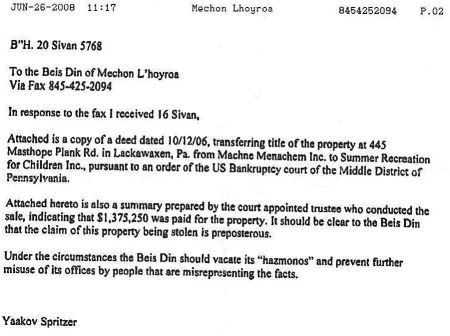 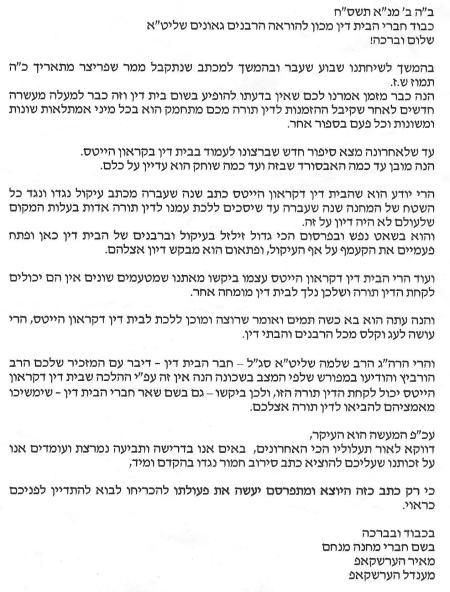 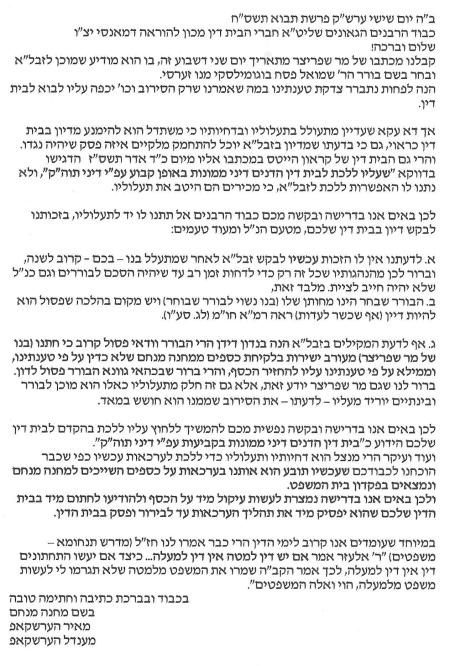 10 Kislev 5769- There you have it folks, Spritzer found another way to avoid true Justice (for now!)

After all the above the original directors decided to play along with Spritzer little game. They approached Rabbi Schwei and requested that he be the Bais Din that Arbitrates this case. Remember Rabbi Schwei is Spritzers “Rav”. 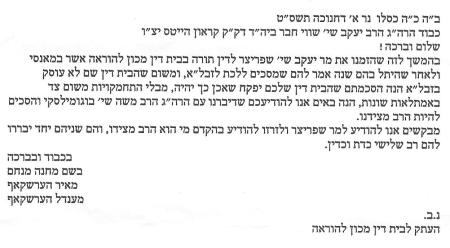 At First Rabbi Schwei was more then happy to be the Bais Din in this case. Two weeks latter, Rabbi Schwei let it be known that he (after all) is not interested (and that the Original Directors should find a different Bais Din). 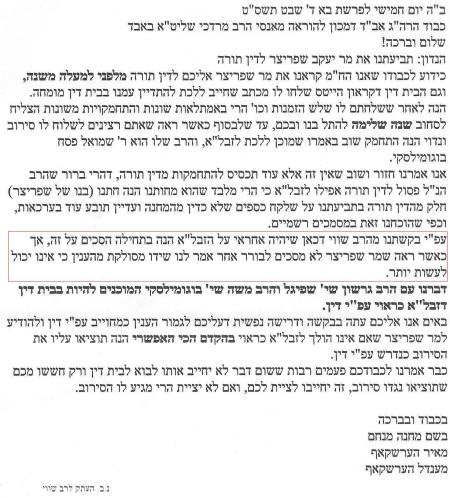 Another Day; another week; another month and perhaps even another year, how long will it take?
Will a man who is known not to listen to Rabbonim come to a Din Torah?

Will a man who is known to take all his disputes to a non-Jewish court, come to face true justice in front of a Bais Din?

Will a man who with no Shame had his own sister arrested (tied up), care enough to find out what Halacha (G-d almighty) has to say about all that he has done?

This entry was posted on Wednesday, February 3rd, 2010 at 1:08 pm and is filed under Din Torah. You can follow any responses to this entry through the RSS 2.0 feed. You can leave a response, or trackback from your own site.

6 Responses to Din Torah: Past, Present and Future